Without Warning by Joel Rosenberg 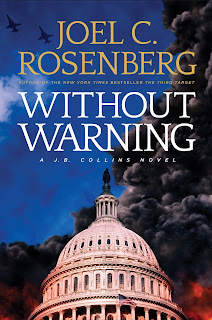 Without Warning is the third book book in a series of political thrillers by author Joel Rosenberg.

The novel set-up sees J.B. Collins, a New York Times foreign correspondent, disagreeing with the US president’s tactics in the fight against ISIS. There is already much conflict within the Middle East, and danger looms inside America. J.B. sees the only solution to this conflict as an all-out manhunt for the leader of ISIS; Abu Kahlif. But will the president listen to Collins or act before it’s too late?

I had been quite excited to read this book, but found it took a while for me to connect with the characters. I believe a lot of this had to do with not having read the first 2 books of the series. I never felt a genuine connection with the characters until much later in the book. The first 2 books set the framework for this one, and you will get a lot more out of this book by having read the first 2. (The Third Target and The First Hostage.)

I still did enjoy parts of this book, particularly watching J.B. Collins’ character development. It took me a while to connect with Collins’ character, but the further I got into the novel, the more I cheered for him.

All in all, there were some nice moments to this book with some good lessons. Much value was placed on family, and the integration of faith was also quite powerful. At the end of the day, I can say I’m thankful I got to read this book. Fans of political thrillers will surely enjoy it.

*Tyndale House Publishers provided me with a complimentary copy of this book. The review was my honest opinion. No compensation was received.*

He has been interviewed on hundreds of radio and TV shows, including ABC's Nightline, CNN, CNN Headline News, C-SPAN, Fox News, MSNBC, The History Channel, The Rush Limbaugh Show, The Sean Hannity Show, and The Glenn Beck Show. His articles and columns have been published by National Review,FoxNews.com, CNN.com, the Jerusalem Post, World magazine, and the Washington Times, among others. He has been profiled by the New York Times, the Washington Times, and the Jerusalem Post.

Joel has spoken to audiences and met with religious and government leaders all across the U.S. and Canada and around the world, including Israel, Iraq, Egypt, Jordan, Morocco, the UAE, Turkey, Afghanistan, Russia, Germany, France, Belgium, Italy, India, South Korea, and the Philippines. He has also addressed audiences at the White House and the Pentagon, addressed members of Congress on Capitol Hill, members of the Canadian Parliament in Ottawa, and a conference held at the European Union Parliament in Brussels.

He is the founder and chairman of The Joshua Fund (www.joshuafund.com), a nonprofit educational and charitable organization he and his wife launched in 2006 to mobilize Christians to "bless Israel and her neighbors in the name of Jesus, according to Genesis 12:1-3."
Posted by Thomas Neufeld at 19:53